On the first Saturday in June, in a tiny shopfront on the Lower East Side, a man in white overalls is inviting people in to join his ‘bowel movement’.

Despite conjuring scenes not worth going into, the pun is fairly accurate.

Inside, the ‘Dump Trump’ campaign started by New York artists is using toilet humor to flush Donald Trump’s efforts to become president, with its centrepiece an image of the real estate mogul as a turd.

Today, it’s holding a pop-up store to raise funds by selling buttons, banners and even limited-edition portraits of the billionaire painted in real dog-shit collected from outside Trump Towers.

Brooklyn art collector Wayne Rada swings through to collect one he’s put aside. He plans to set the piece in museum-quality white framing, “to really make the brown ‘pop’”.

“I’m a fan of art that encapsulates a moment in time,” he explains. 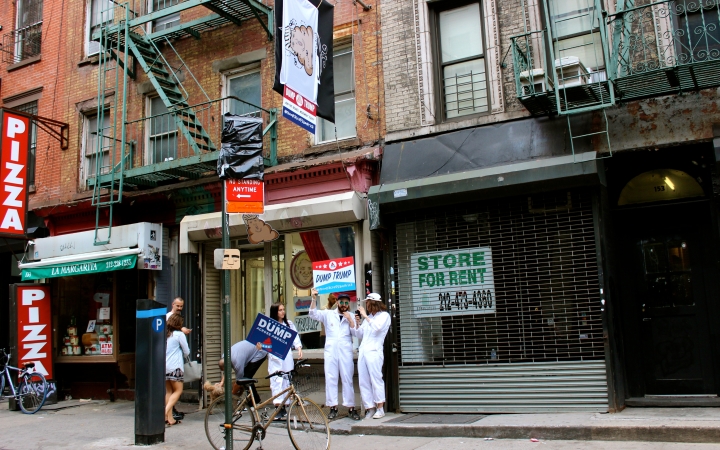 The movement started around August 26 last year when a 10-foot-high mural of Trump – re-imagined as a the emoticon of a turd, replete with a blonde toupee and buzzing flies – appeared on a red-brick wall on Orchard St, between Canal and Division Sts.

The artist, a Lower East Side restaurateur who goes by the name of Hanksy, posted it on his Instagram account, and it has since been regrammed thousands of times.

At the store on Saturday, Hansky’s manager Brandon Rosenblatt recalls Hanksy texting him the now-famous Trump turd image he’d mocked up on his computer.

“I said, ‘That’s the dumbest thing I’ve ever seen’. But he decided to ignore it, painted it and it went viral. It’s just snowballed from there.”

By snowballed, he means the image started to appear everywhere. From bootleg t-shirts to stickers, to signs all over the city. A group of volunteers amassed behind the image, and got organised, calling the movement, simply, ‘Dump Trump’.

The Dump Trump volunteers now travel the country, protesting at Trump rallies in their white overalls and Trump-turd placards.

Volunteer Brad Bailey, the cheery welcome party in white-overalls, estimates the campaign has raised a couple of thousand dollars today. It is also funded by a “private backer”.

The artist and videographer from Brooklyn has been involved since February, and said the money raised would go back into their ‘Dump Across America’ campaign, disrupting Trump rallies.

The team had protested at rallies in New York, New Hampshire and South Carolina, even infiltrating one rally in Myrtle Beach, SC, by concealing turd placards behind legitimate Trump placards.

Bailey said the protesters got as close as 20 feet away from Donald Trump, thanks to one of its members being in a wheelchair.

“We were texting each other saying, ‘five minutes, two minutes’, and then we peel back the Dump Trump posters and everyone turns.”

The presidential hopeful’s response was swift.

“You know, you got a couple of guys who think they’re going to get a little bit of publicity for themselves because they hold up a picture of a potato.

Trump’s campaign has made no other comment on the matter.

As the shop wound down on Saturday, patron of the arts Adrian Wilson, who lent the space to the artists for the day, emerged from out the back after throwing a party for artists the night before.

“That’s what art is about, creating a dialogue,” he says. “I don’t care if you’re a Trump supporter or a Trump hater, as long as you question things.”