India is a country filled with colour and light, but like everywhere – there are shadows. Anna Bradley-Smith tells about being caught in the dark.

I could feel him beside me, driving slow enough to stay in line.

It was dark and there were only a couple of other men scattered on the street. One put out his rubbish and stepped back inside his gate. I wanted to call out, I could feel something wasn’t right. Less than a kilometre from home, I couldn’t have felt further away from locking my front door.

I’d been in India for seven weeks, I’d tossed my initial fears aside and stopped following what I’d come to think of as overly cautious, assumptive pieces of advice. This was my home and if I wanted to walk at night I’d walk at night – I knew the area, I’d be fine, I reasoned. But this turned my stomach.

I don’t know how long he’d been watching me. I’d got out of my auto to pick up tailoring and get something to eat. It was just past 8.30, it was dark. I’d done the short walk plenty of times.

He asked me where I was from. His black helmet covered most of his face, all I could see were his dark staring eyes. Was I a tourist? “No. I’m a journalist, I work here.”

I recognised him. His scooter had been stopped next to me at traffic lights earlier. He’d watched me pick up my clothes, go to the shop, start walking home.

“Do you want a lift?” It didn’t matter how much I said no, he wasn’t going anywhere.

I walked as fast as possible. “What are you eating?” I looked straight, didn’t answer. “Can you feed me? Feed me.” His tone changed, this was an order.

I pushed against the scooter. Running felt like the wrong thing to do, plus he had a motor.

There were more than 36,000 rapes reported in India in 2014, and those are just the ones that make it to the police. Crimes against women are rife – stalking, molesting, verbally assaulting. The issues are as social as they are criminal.

Some politicians have called for women to “dress decently”, take self-defense classes and not loiter after dark. That goes down like a glass of cold sick. Only recently the country banned a ‘two finger’ virginity test to medically examine rape survivors. I knew the stats – I couldn’t plead ignorance. 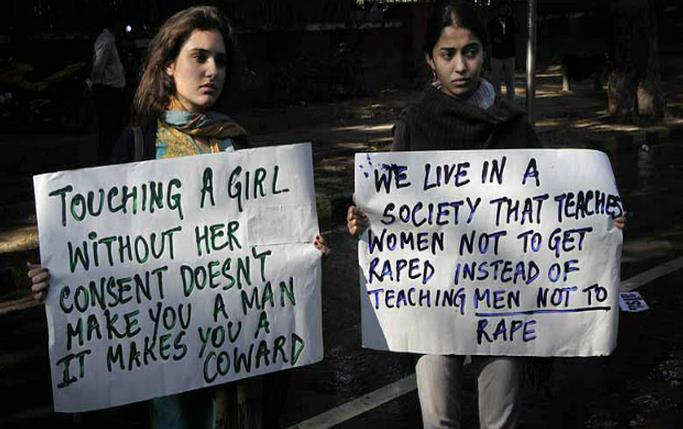 “Why are you walking so fast? I have heard people from Australia and New Zealand are fond of India. Why?”

I knew in my stomach this wasn’t good. “Do you like sex?”

I tried to ignore him, his scooter edging me into the dark shadows of the roadside.  There was no-one else around. “I’ll pay you.”

My stomach dropped. I told him to leave me alone, he told me to stop trying to get away. We were getting closer to an intersection where there were people.

He angled his scooter in front of me, leaned over and grabbed at my breasts. I pushed him off and yelled out. He did a u-turn and drove away, “bye baby”. I felt sick.

I was 500 metres from home. That two hundred had been the longest of my life. I’d kept my hand firmly on my phone, but I had no idea who to call with just 5 per cent battery.

The brutal gang rape and murder of Jyoti Singh on a bus in Delhi in 2012 turned the international spotlight on India’s record of sexual assault. Social media added to pressures put on government officials and departments to address the issue. Campaigns were launched, and initiatives spurned. The India I was in had trailers ahead of movies urging the reporting of assaults, posters through the metro telling men it was not their right to touch women. But quoting a poster or trailer couldn’t have felt further from an option.

I didn’t want to look over my shoulder, but I did and he was there. He’d come back. His white scooter stood out from the parked cars he was trying to blend into.

I was in trouble. I changed course, no way was I walking down my dark road alone. He pulled out and starting approaching, his eyes drilled into me. I headed towards the dairy I’d been in the night before, there were people there.

He drove past and smiled, it wasn’t friendly. He stopped ahead and turned back towards me.

The young men at the shop smiled and greeted me as I ducked in. I didn’t know what to say, I hid behind one of them and said someone was following me. No matter how hard I fought it my eyes welled and voice faltered.

It got later. One of the boys came in to say the man was still circling the shop.

Fifteen minutes would have passed with me standing in there almost clinging to the cashiers back. Soon a small guard of five was trying to shepherd me out without him seeing, they called me an auto and when it arrived I got in as fast as I could. I didn’t question who the driver was – I didn’t have another option. I just didn’t want the man on the scooter to follow me home.

The driver refused to take my money, he just wanted to drop me as close to my front gate as possible. I fumbled together some notes, not enough but I couldn’t stand around looking, and got through my gate. The smallest feat of crossing that line felt like I’d just run ten marathons.

I rushed up to my apartment and double locked the door for the first time, finally understanding what the women around me were warning me of.