In five hours I’m going to be in the same room as a man I’ve turned in to a God and I have no fucking idea what to wear.

I’ve given up even thinking about what I would say if I got the chance. How do you mentally prepare for being close to someone who you listen to daily, maybe within reach. Someone who’s been with you for years; who makes you feel sexy, independent and powerful, whose words are often problematic for the life you try to lead – but you ignore that. Someone you can hardly look at photos of on the internet without feeling a kind of way.

The definition of idol is an image or representation of a god used as an object of worship.

That is exactly what I’ve made him into, an idol to pull me through; in my mind he’s more than a man, but reassuringly is still just a man – it is what it is. I even have a tattoo of his initial on my finger. 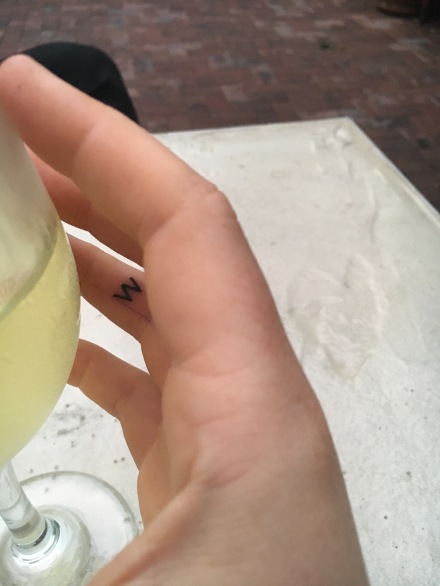 Lil Wayne, born Dwyane Carter on September 27 1982 in Hollygrove New Orleans, is hosting a birthday party at a club in Long Island tonight. Jessy and I are catching the train there in a few hours.

When I first moved to America it was my goal to meet him. To tell him Tha Carter III’s Let the Beat Build hasn’t left rotation in my brain since 2008. That when A Milli comes on in the club it makes me so happy my body temperature rises.

The year I was born, 1991, Lil Wayne became the youngest member of Cash Money Records – he was 9. Since then he’s released 12 studio albums, collaborated with so many artists, signed some of today’s biggest stars, represented his town, had babies, been philanthropic, invested in sports, kept skating, and made so SO much music.

Yeah, I just do my Wayne
And every time I do it, I do my thang

For me he embodies what you can achieve if you put in work. My W is for him; to remind me to do my thang – which conveniently also begins with W, write.

Tonight I am going to see him close up.

Last year Jessy and I went to Philadelphia to see him live, and even from more than 200 meters away his cute as hell smile sent the most insane tingles through my body. I’m getting nervous writing this, I have no idea how I’m going to react if we make eye contact, I genuinely don’t think cardiac arrest is an extreme outcome.

All I can do to keep my mind off it is have an internal debate about whether jeans are too casual for the club and use his lyrics as motivation to write this.

Through the pencil, I leak on the sheet of the tablet in my mind
‘Cause I don’t write shit, ‘cause I ain’t got time
‘Cause my seconds, minutes, hours go to the almighty dollar

I’ll let you know how it goes. God save me.