Many of us want the perfect version of ourselves, or at least something on the way to it.

Be it be a tiny waist and ballooning butt cheeks, abs, tinsy arms or tight calves; we cut out bread, we cut out pasta ,we cut out cheese, chocolate and beer. WE GOD DAMN RUIN OUR LIVES FOR IT. Despite the gym memberships and kickboxing classes, perfection remains elusive.

But bodybuilders are a weird breed that somehow commit – are they obsessed, are they mentally unstable, are they just superior in their goal setting? Anna Bradley-Smith went to a competition to see if she could have what it takes (knowing all while she doesn’t).

John Pyer’s teeth and eyes shine like small LEDs, the only parts of his chiselled body not painted a thick bronze. Even his finger and toe nails are glowing.

“I hate this part. It’s so thick, your skin can’t breathe. Most of it will come off tonight in a really hot shower with a good scrub, I’ll exfoliate like crazy.”

As much as I like a good glow, I don’t think I’d pull this look off; although it is about the only feature of John’s I’d have the ability to replicate.

The 25-year-old refrigeration engineer is vying for the overall men’s award at the Top of the South Classic Bodybuilding Championships. Sitting backstage next to a rubbish bin full of banana skins, he’s tense.

His muscles look like they’re stretching his skin to the seams, protruding veins the thread holding everything together.

The walls around are covered in plastic; smears of bronze show it’s doing its job. There’s a jar of peanut butter on the floor.

I take it that means peanut butter is allowed, meaning our diets aren’t that different – but I am uncomfortable with the veins, not sure about making mine pop out like that.

Women walk past in revealing bikinis, curls bouncing, diamantes and groomed abs trying to out glow each other. Aside from the weights on the floor and background echo, ‘rear lat spread – strike’, the dressing room could easily be for a ball.

It’s John’s second competition. He’s one of 41 competitors covering 19 classes who have travelled from across the country to be here; a good turn out, organiser Mark Anderson says.

“Some people do it as something on their bucket list, just to get up there and prove they can and then that’s it,” he says. “But most people tend to want to come back for another go.”

There’s some proof to my obsession hypothesis. 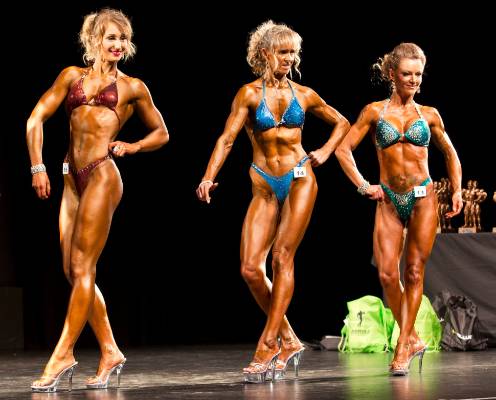 John has had a few years off bodybuilding and only started training for the competition a month ago, after splitting his shin in kickboxing. He saw the show was coming up and thought “OK I’ll cut for it,” he says.

“I had to switch my diet up pretty seriously and dramatically. Before I had a see-food diet – saw it, ate it – but when I decided I was going to compete I sat down and made a plan.

“Every now and then I’ll have some chicken and then instead of rice I’ll say stuff it and have a thing of ice-cream because it’s still carbohydrates your body uses that energy,” he says smiling.

Let me say here, I interviewed John because you could tell he was the most easy going person in the auditorium by a country mile. I seriously doubt anyone else was downing tubs of Ben and Jerrys for dinner. 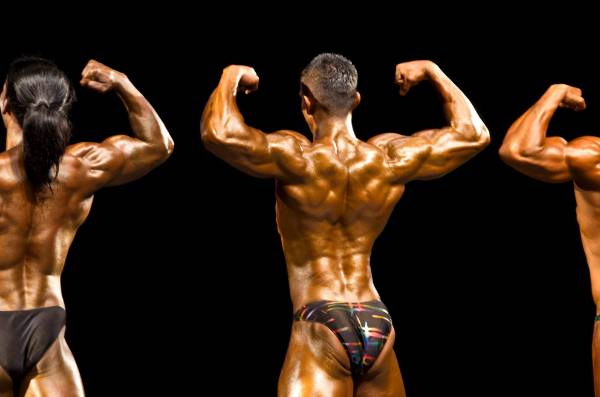 Nearby a competitor is having last minute tan applied with what looks like a paint roller. He squirts some anti-cramp spray in his mouth and walks on stage, his friends discuss gym times for the following day, “no way am I on the drinks tonight,” one says, “it’s time to get serious.”

Another red flag for me.

John says when he first started he was like a caveman not wanting to leave his room, but now he’s learnt to be flexible. The biggest misconception about the sport is that you have to be bound to it, he says.

In the lead up to the show John was in the gym twice a day chiselling away any imperfections. For nationals he says he’ll be mixing his lifting with kickboxing training.

If he does well, it won’t be the first time. At the 2012 nationals he walked away the class three champion.

I stay and watch the show, but don’t even have the commitment to hang out until the awards. It’s all a bit much. My take away is that John was really cool, everyone else was a different personality type to me and I’m not destined to be a bodybuilder. But I’d definitely hang out with John again.