Sometimes in life things happen that you can’t explain like deja vu, covfefe and how you have one chip and the whole bag’s gone. Or how, in a moment of extreme self-doubt, I tracked down season one of the Simple Life.

I was a first-time viewer having skipped the series in its heyday of the early aughties; my 12-year-old self either uninterested or outright unwilling to give Paris and Nicole a chance. But I’ll tell you what, boy did it come to me in my hour of need. 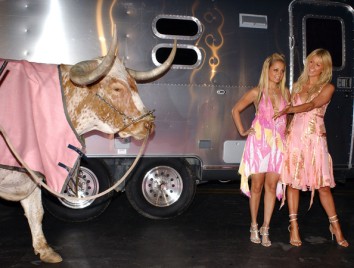 Without work, my friends, any form of a love life, a wardrobe, and being no short of a 20-hour flight and lack of a visa away from where I wanted to be, I was in a rut.

Lying on the couch mid-afternoon in a baggy tshirt and tracks clutching a jar of peanut butter and a spoon, my head hurt, my soul hurt. My ideas had withered, everything was grey; no sleep for the wicked maybe, but no peace-of-mind for the anxious and overwrought.

Without even the motivation to write a checklist, I picked up the remote. Nothing zoned me out. Until something in the netherregions of my brain happened, I thought of Paris Hilton.

I found a five season, 54 episodes long life source I could tap into when I needed – my immediate lull satiated by an influx of timely messages in just four episodes. Let me share those with you to use as needed.

No question is too stupid

When Paris unashamedly asks if Wal-Mart sells walls and Nicole questions what a soup kitchen is, I finally see it – who’s to judge the content of what I ask if I’m confident in my delivery and they’re too dumbstruck to answer.

When people think your below them, your wit will be a weapon

Put your personal touch forth

If you can see a better option than the status quo, speak up, my friend. When Nicole tells the group of quilters to burn cigarette holes in their quilts to make them more edgy, it doesn’t go down well but I bet I wasn’t the only one open to a more exciting approach.

Who even decides what a failure is

I would argue that Paris and Nicole redefined failure for me. You don’t have to be good at a task, just give it a go and if you attract more customers with your outrageousness, how is that not success? And if you never want to do it again, just be really bad at it and you won’t be asked.

You can literally run away from real life

When the going gets tough, middle America is really big. And why just stop at middle America, there’s a whole globe out there to run to and reinvent yourself – forget the bills, the job, the relationships, you can be free.

People see you make out with multiple guys, so?

Have fun! If Paris and Nicole can be broadcast to millions of people and can laugh about it then damn it, so can I. Hit the club, get loose, drink your problems away, and take lots of videos so you can curl up watching them the next day.

Your body, your clothes = hot

I really don’t know whether or not they had stylists for the show or not, I’m choosing not to look because damnnnn, they were fabulous. Be it the boots, the miniskirts, the layers of print, the pink, the camo, the trucker caps, the list goes oooon, they rocked it. If you look like a cross between a toddler’s hungover mum and a sexy barbie, girl – you do you.

Voice your opinion, slip in a fib

Tell guys they’re hot, tell people you think what they’re asking you to do is terrible, pretend your cat has died to get out of work. Do it with a smirk and it’ll work out.

I mean, it’s obviously a lot easier to get away with these things if your dad is Lionel Richie or you’re an heir to the Hilton hotels, but the next time you feel like your world is imploding hit up youtube and give it a go, b***h.