I’m walking up the steps of Opening Ceremony on Howard Street in Soho New York.

In front of me is a man in immaculately cropped pants, a jaunty beanie and a small world map cast in gold hangs on a chain round his neck.

It’s 10:55 and the street is quiet. He enters the store and turns the snib behind him. I hesitate for a moment and a thick Bronx accent from over my shoulder softly demands; ‘Do you work here?’ I turn around and before I can reply to the contrary, a middle aged man eating an egg salad sandwich from Starbucks walks up to join him and asks us both; ’Hey are you guys here for Snow Beach?”

At the time of Snow Beach’s original release, Polo had already cemented a die-hard following throughout the 80s amongst fans of the brand, who were commonly known as “Lo-Heads”.

New York City had become home to a number of street gangs whose members bought, traded, stole and above all, appreciated Ralph Lauren’s designs. Amongst Ralph’s followers, Snow Beach, in its scarcity and strange beauty, might be seen as the unsurmountable peak of Polo.

I myself, having grown up a few years later and far away in London, am far from a Lo-head, but in my 15 years as a wearer and dealer of vintage sportswear have caught the occasional glimpse of these mythical garments. To me and many others Snow Beach is the white whale of sports wear. 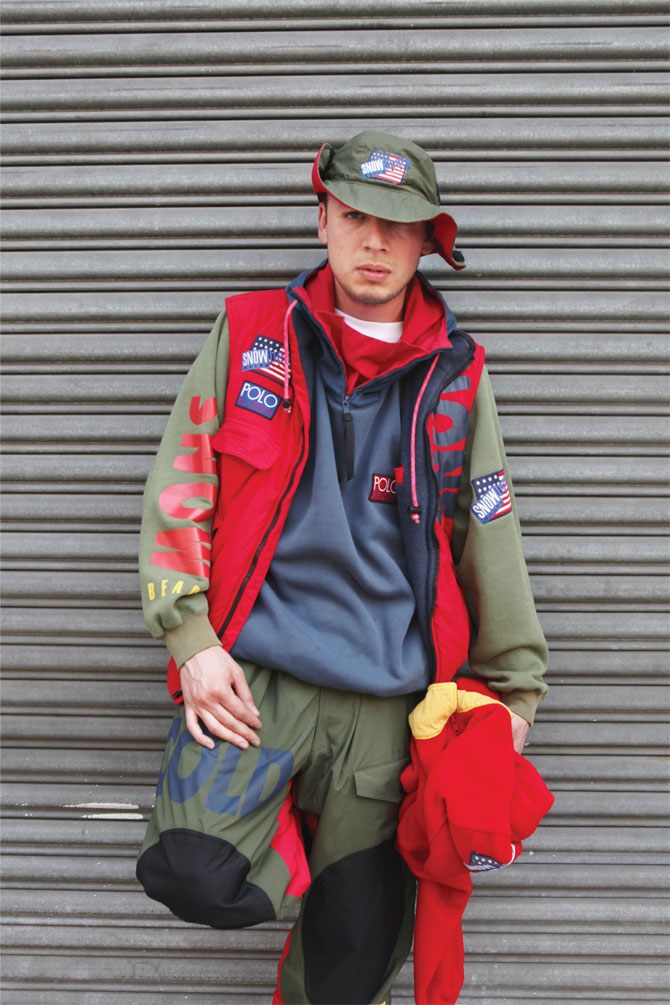 When I read that Ralph Lauren was reproducing the line 25 years later I knew I had to try and snag myself a piece. As a rule, I find reproductions of Vintage to be contrived and lazy. Why not try to design something new that captures people’s imaginations in the same way? But for this I would make an exception. I was giddy with excitement.

The hallmark item of the collection is a yellow and navy blue 3/4 pullover jacket made infamous by Raekwon, who wore it in the Wu-Tangs 1994 video  for their single  ’Can it be so simple’. A vintage one will run you upwards of $2500 on eBay. When they announced the release, Ralphlauren.com had not listed any prices, but a quick investigation into the Snow Beach hashtag reveals the reproduction will be offered for a cool $395. I can probably stretch to that, and having camped out for a few sneaker releases in my teens I decide that I’ll dust off my deck chair and thermos and get in line overnight.

And so I am at the Soho Opening Ceremony store at opening time on Wednesday, “Snow Beach eve”, to enquire about the queueing situation.

Dave, my new friend from the Bronx, tells me he has just come from the Prince Street Ralph Lauren Polo store, the only other retail outlet that will carry the exclusive release. Apparently they have finished distributing 350 wristbands entitling the wearer to buy 3 pieces from the collection, to a horde of people who had been camping out there long before us.

Waiting outside on Prince Street at this point is not going to get me any closer to this grail.  “People were there since Monday, sleeping in their cars and shit. I’ve got a job and responsibilities I can’t be doing that. The thing is, about half – no about 85% of them are hypebeasts and thrifters just trying to make a quick flip. None are them are gonna rock the shit.”

Dave is expressing a tension that exists in Ralph Lauren Polo’s current fan base. The original Lo-Heads are angry at a new generation of streetwear enthusiasts growing up on Supreme, whose highly limited drops are instantly resold every season at eye-watering mark ups. Older Polo fans insist, reasonably, that clothes are for wearing and are loathed to see the fashion culture that they created being hi-jacked by younger opportunists who don’t appreciate its history.

I’m quite aware of the hostility towards resellers in the Polo community, and have dressed myself in some of my rarest vintage Polo pieces to give myself some credibility.

We all continue chatting and Dave reveals to me that he would himself sell on items for a couple of hundred bucks over the asking price, but only to those who showed themselves to be true aficionados. “I do a bit of selling yeah, but Polo to Polo – Supreme to Supreme.” It seems that even a Polo purist isn’t impervious to the allure of a bit of fast cash.

I have to admit that I myself had been weighing up whether to flaunt my Snow Beach or put it straight on eBay. I have the utmost respect for the streetwear pioneers that put Polo on the map and helped revolutionize modern menswear as we know it, yet the irony of sanctifying the purchase of commercial products to such an extent is not lost on me. It’s a bit of a conundrum and I’m not sure where I stand, especially since rent day is coming up and I know I could easily double my $400 selling a yellow pullover.

The man with the world map medallion unlocks the door behind us. He knows what we’re after and tells us curtly and politely that a raffle has been conducted for the following days release and the winners already notified.

In 10 minutes, my hopes to join Raekwon in the elite Snow Beach club have been dashed. At least I don’t have to worry about whether I’m a Lo-Head or a hypebeast anymore.

Fingers crossed though, maybe Dave will offer me one on the Lo Lo.

One thought on “THE WHITE WHALE OF SPORTSWEAR: A HUNT FOR RALPH LAUREN’S 1993 SNOW BEACH”