It came as somewhat of a surprise on a platform that censors women’s areolae. On Instagram’s Discover page, a series of pictures of a fully naked woman squatting in a shower, face scrunched in pain and concentration, a baby’s head crowning in her stretched vagina.

I was shocked, and fascinated. Is this what giving birth looks like? You’d think as a woman of childbearing age I would know. But I know nothing. I’ve seen more giraffes give birth than humans.

Less than a month ago, Instagram officially changed its policies to allow uncensored images and videos of childbirth on its platform; in all its gaping vagina-y, bloody placenta-y, lactating boob-y, baby testical-ly glory.

And the change was all thanks to a petition started by one woman, Katie Vigos, propelled by her hugely popular Instagram account @empoweredbirthproject.

HEALING THROUGH THE GRAM

Vigos, a registered nurse, doula and mother-of-three from LA, launched the petition in December 2017 after a series of watershed moments.

She’d had a tough pregnancy and ended up needing an emergency c-section for her third child. But she’d found strength in sharing birth stories and supporting other moms through social media.

“I felt broken and defeated, as if my vision of empowerment through birth had failed,” she wrote on her blog. “It was only by sharing the process of postpartum recovery with my incredible Instagram community that I began to reconcile the trauma and find healing within my birth story.”

“As the project’s following began to grow rapidly I realized so many people are truly hungry for support and encouragement through pregnancy, birth and motherhood.”

So when she saw that a woman’s birth photo (of a baby half-in, half-out) had been deleted by Instagram, along with a heartfelt poem the new mom had penned to her baby, she felt compelled to act, Harper’s Bazaar reported.

While the poem was lost, she reposted the birth images, saying in the caption she was tired of “dancing around the fine print of Instagram’s censorship policies. I’m done. I don’t care anymore.” The image was taken down again (after getting 30,000 likes), but the water had broken on the #uncensoredbirth movement. Vigos’ petition was launched on Change.org.

Gaining 23,136 signatures, the petition was taken to Instagram’s director of public policy Nicole Jackson Colaco. It asked that Instagram allow people to post “graphic images of physiological birth” with images blurred so people can choose to tap to see.

Success. Somehow Vigos convinced the platform to see value in the change. On May 19 she announced on her page that in a conference call with the platform it had advised her the policy change requested was official.

From now on, you should not be surprised to see birth photos and videos on your feed. (Although Vigos notes they might be accidentally censored as Instagram “perfects its technology” to recognize birth versus other forms of nudity). 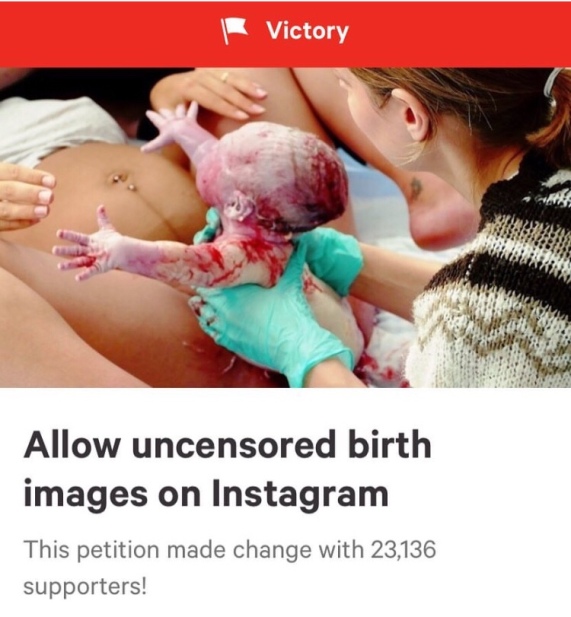 BRING ON THE BIRTH

So far I’m loving it. The images are beautiful, gross, inspiring and terrifying all at once. I’ve always been afraid of childbirth, and probably rightly so. But my fear is verging on putting me off having children at all, and much of that may be the fear of the unknown.

Almost 30 years old and all I knew of childbirth up until yesterday was stories of pain and shame. A high school teacher told me she’d rather hold her hand in a fire for a minute than give birth. You push and poo everywhere. It feels like shitting a couch. Your vagina is most likely torn and has to be sewn up. Postnatal depression follows.

But the #uncensoredbirth movement has truly given me a new perspective. Woman in pain, certainly, but looking so strong at the same time. The pain immediately turning to joy on their faces when they draw the baby into their arms. The support of their family, friends, partners that makes your heart swell to see. Outpouring of love and support for women admitting their desperate moments after birth.

I’m not ready, by any means, but Instagram may just play a role in my considering birthing a baby of my own one day. It certainly looks easier than having a giraffe. 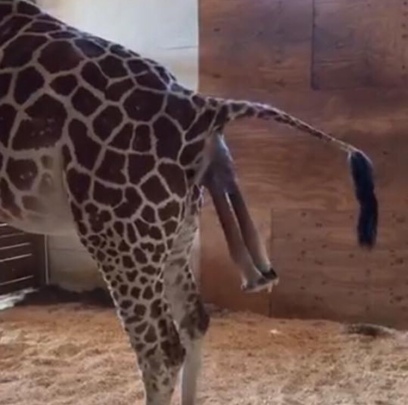